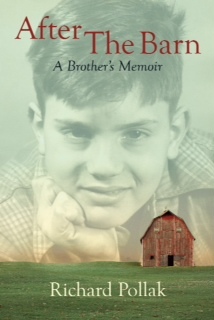 Click here to visit my page at Amazon.
Buy the ebook at BookBaby

"After the Barn is a gripping story of how a family deals with tragedy, and with secrets. But it is also a testament to the bravery inherent in seeking the clues to one's intimate past." – Daniel Okrent, first public editor of the New York Times and author of Great Fortune: The Epic of Rockefeller Center and Last Call: The Rise and Fall of Prohibition.

"Richard Pollak, in his irresistible and affecting memoir, takes us on an odyssey in which we discover how tragedy extends far beyond the event itself to a lifetime of aftermath, of ripplings and reverberations hiding and appearing in unlikely and astonishing places. This is a beautiful book." – Jenny McPhee, author of the novels A Man of No Moon, No Ordinary Matter and The Center of Things.

After the Barn begins on a hot August day, when the I was fourteen, and angrily shouted down to my parents, "Tell him you'll punish him if he doesn't stop hiding!" Moments later I was sucked into a maelstrom of straw. I have no memory of how I managed to extricate myself and get down from the loft, or of anything else on that fateful Saturday, when my 11-year-old mentally disturbed brother, with whom I had been playing hide-and-seek in the barn, slipped through the same hole and fell thirty-five feet to his death. Only a few months later, I lost consciousness and also fell: down a flight of stairs, awakening to learn that I suffered from the "falling sickness," epilepsy. Twenty-five years on, I was still coping with the unnerving disorder and the depressive side effects of anticonvulsant medication, when my mother fell through a hole and nearly died much as her son had. After the Barn is an account of this family history, at once an exploration of the medical, psychological and literary worlds of epilepsy, mental illness, and childhood death, and a personal rumination on grief, sibling guilt, and the elusiveness of memory.