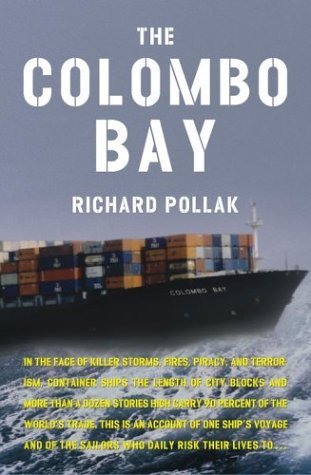 When I woke up in Hong Kong on 9/11, my first thought was to abandon the book I had come to write and get home to my family in New York City as soon as possible. But after some agonizing I decided to stay the course I had originally set. Two days later I boarded the Colombo Bay, a 60,000-ton container ship, for a five-week journey half-way around the world. The book traces the mammoth ship's voyage at this terror-stricken time.

"To the ranks of seafaring literature, we may gratefully add The Columbo Bay, an engrossing account by Richard Pollak of his global circumnavigation on a modern container ship. And to the traditional perils of sea crossings--piracy, tropical storms, running aground--we may now add global terrorism. Those who venture with Pollak on this remarkable journey will gain a new appreciation for the importance of the world's sea lanes, and the people and ships that populate them." --James B. Stewart, author of Heart of a Soldier and Den of Thieves.