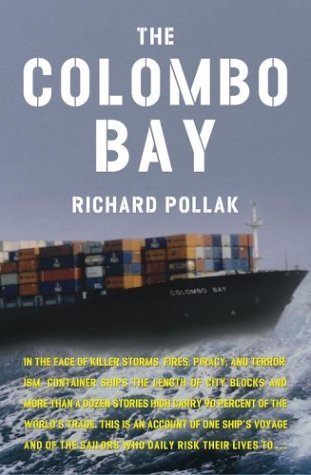 When Richard Pollak woke up in Hong Kong on 9/11, his first thought was to abandon the book he had come to write and get home to his family in New York City  as soon as possible. But after some agonizing he decided to stay the course he had originally set for himself. Two days later he boarded the Colombo Bay, a 60,000-ton container ship, for a five-week voyage half way around the world. Pollak's account of the journey and of the officers and crew who manned the mammoth vessel at this terror-stricken time was published in 2004 by Simon & Schuster to unanimously enthusiastic reviews.

"To the ranks of seafaring literature, we may gratefully add The Columbo Bay, an engrossing account by Richard Pollak of his global circumnavigation on a modern container ship. And to the traditional perils of sea crossings--piracy, tropical storms, running aground--we may now add global terrorism. Those who venture with Pollak on this remarkable journey will gain a new appreciation for the importance of the world's sea lanes, and the people and ships that populate them." --James B. Stewart, author of Heart of a Soldier and Den of Thieves.

This is "a fascinating inside look at how everyday goods now get to their final destination," reports Library Journal, a book, concludes the Milwaukee Journal Sentinal, "that will delight any armchair sailor."

A moving account of the death of a child and its impact on the author and his parents.